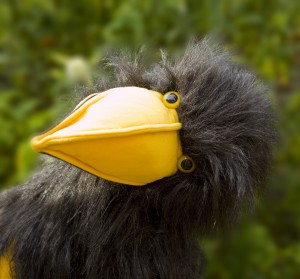 I gave myself permission to play! What about you?

Well hello and caw! Hope you had a fun Christmas?! We had fun, out in the field watching the silly pigeons trying to pull crackers and scaring themselves to death each time one went *Bang!* …Hilarious! You had to be there!

By the way, I meant the crackers going *bang* and not the pigeons! Caw!

So this is my last blog post for a while as Richard is insisting that he’s coming back next week. I think he’s going to be talking about mince pies…they’re his favourite subject at the moment!

And thinking of food, these days after the Big Bash are all about leftovers aren’t they? Lots of bits of this and portions of that being reheated and enjoyed in all sorts of odd combinations.

So in the spirit of post-Christmas recycling I thought I’d choose two of my favourite posts from the site. It’s what that lazy, mince-pie-munching ‘thinker of great thoughts’ Richard would approve of. Caw! They’re great little posts, but don’t tell Richard, or he’ll get all puffed up!

…Which is all about giving yourself the chance to get on with life. It’s an interesting list that you can choose from. Caw! I chose them all! Which one did you like?

Well that’s me all done for a bit now. I’m off to annoy some pigeons, but I may come back again.

As this is the last post of 2010, Richard would like me to say Happy New Year to you. We both wish you a permission filled 2011…!!

Caw caw! Thanks for being with us this year! Bye!