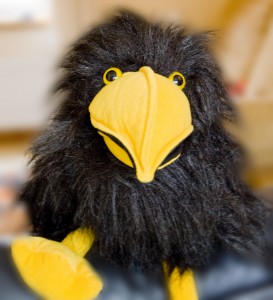 Caw! It’s me, Crow! Bet you didn’t expect that did you? Richard has a week left to finish his book and has asked me to step in at short notice to write something. He says he needs the ‘creative space’ this week, but personally I think he’s just faffing. Or necking sherry straight from the bottle, which he says is an old Victorian remedy for Writer’s Block. I’m not convinced though. Caw! What an old fraud!

But hey, I get to say something and I thought I would mention that last week had Valentine’s Day in it, which is not something I usually worry about as a Crow. However, given that I’m a bit of an old romantic (don’t tell the pigeons, or they’ll never leave me alone, with their irritating cooing) I think you humans are odd.

I mean you work hard (or so Richard tells me) for 365 days a year at your jobs, or polishing your houses, and yet you only have one day for love! One day! Even your banks get eight days of holiday! Crazy or what! Caw!

I mean I’m just a bird, but if I liked a bird I’d tell her more than once a year that I loved her! Birds need telling and showing you know. Or they fly off with another Crow who’s all beak and shiny tail feathers and then don’t return your messages, well, er, er, I guess that’s what they do. That happened to a close friend of mine. Apparently.

So, listen you humans; I’d like you to do some more lovin’ this week and double your love-output for the year. People like to be loved and now that the Big Day has passed it will look like you really mean it and aren’t just jumping on the commercial band-wagon.

Go for it! Crow says…love!

And peace to all birds (but not pigeons, as there are limits).

Oh and you can watch Brian again if you like. He’s cool too.

Caw! I’m off now to do some crow lovin’ and make a new bird smile! Caw, caw!