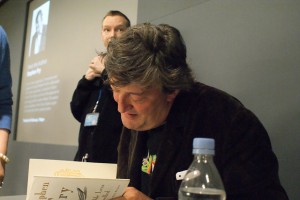 To Richard... from one scrummy writer to another....

Did I mention that I met Stephen Fry last week? He came to Holt to let me buy a copy of his latest book and of course I couldn’t resist popping by for a quick chat. I even let him sign it for me, as I know what a buzz that gives writers.

And after he had signed it I handed him one of my new Twitter cards (see last week’s post) and asked if he’d be kind enough to pass it on to Mrs Stephen Fry, as her tweets are very droll. He laughed and said ‘Oh my goodness, yes I will’ in that voice of his that could have been agreeing to try out a particularly fiendish piece of grammatical tonguery, or just polish off a slice of rampantly creamy victoria sponge…

…And breathe out. See; I went all Stephen Fry there for a minute….

Anyway, as I was saying, the point was I gave him a card and asked for something. An hour later (I assume he had rushed home specifically) he had tweeted out my request to @MrsStephenFry and in addition @PippinFry was now following me, as were about a dozen new people.

Much fun was had by all as we talked about getting a royal mention, but the point of it all was this:

When you’re networking it pays to ask for something specific.

People are more likely to remember it and act on it than if you’re just asking for something vague. People remember specific details and not generalisations, so don’t ask people if they ‘know someone who could help me’ …instead ask them (in my case) if they ‘know anyone who would be interested in becoming an ILM Accredited Level 5 Coach?’

I would have asked Stephen (we’re on first name terms now), but I assume he’s already qualified, so went for the Twitter option instead.

The vast majority of my recruitment colleagues agree that 75% of all new roles are filled through networking, which is bad news if you’re just hunting on websites and in the sits vac section of your local paper. However, to be successful at networking you have to ask for something specific. So, please ponder this question, which could make a crucial difference to you:

Q: Who are you meeting this week: What precisely will you be asking them for?

Here are some typical answers to that question to mull over:

A) Who do you know who is looking for a business manager?

B) This has been a useful meeting and could I be cheeky and ask for the names of 5 people who you think would be good to talk to?

C) Thanks for your time and I’m interested in offering people a free two-day consultancy project, whilst I look for work. Who do you know who might be interested?

Which one of the above might work best for you? I had planned my Stephen Fry request in advance and I had practiced my words a couple of times too, to be sure I captured the moment confidently. He was fun to meet and if he’s signing a book near you please pop in and say ‘hi’ from me…

If you’re new to this blog there are three great books listed on the homepage and you’re welcome to browse. One of them is one of the best practical guides to job hunting around. I know, because I wrote it, based on direct feedback from candidates and observation about what makes for success in the current market place. In addition, if you’d like to know how to write a book, do contact me and line up your questions. Or, if you’d like me be a speaker for your group or event then you can have that as well. I’ve been told that I’m good at it too. What would you like? Networking? Leadership? Running a business? Or to tap into the world of Transactional Analysis?

We’ll be looking at one of the most common errors people make on their CV. I’ll bet it’s not what you’re thinking!