The World of Behavioural Strokes (Part 1) 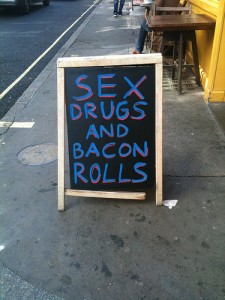 Motivating your team the Soho way. Just a roll for me thanks...

A stroke is a unit of recognition, in Transactional Analysis terms: A wave, a frown, a handshake, a smile, a cross look, a hug, a pat on the pack. Strokes flow out of the words we use, they way we make eye contact and the body language which tells someone we’ve noticed them. Do we smile or scowl? Congratulate or condemn? Praise or persecute? Given that we get the behaviour we stroke, when we think about our daily work in organisations it can be useful to pause for a moment and consider how we stroke people. Please have a look at the five types of strokes below. Which ones will you be giving out this week?

1. Unconditional Positive strokes. When we love, or appreciate, someone for just being there. These can be really intense and rewarding. Think of the times you’ve told someone you’ve loved them, or at work brought doughnuts for your friends, just because you like working with them.

2. Conditional Positive strokes.When we praise someone for doing something. They’re called ‘conditional’ because you have to do something to merit them. These are great strokes and it always saddens me when I meet leaders who say: “I don’t need to tell my team they’re doing a good job; they know  I think that.” Yeah right…unless you happen to be President of the Mind Readers Association, people need to be told and told often. (A tip: you can also encourage thinking by stroking ideas and creativity).

3. Conditional Negative strokes. These are the opposite of the ones above. Think of all the times you’ve berated people for poor workmanship, or lacklustre attention to detail. These are all still strokes, just not very nice ones to have.

4. Unconditional Negative strokes.These are where sexism, ageism, racism etc sit; where we get criticised for something out of our control. Ever said: “Blondes/Young people/Foreigners are stupid?” In this example the person can’t help being blonde/young/foreign…they just are. These are nasty strokes. You should avoid them.

5. Plastic strokes. At the start they feel good, but they end in a nasty little qualifying comment, which leaves a whiplash sting to them. There’s no need to qualify a positive stroke; just say it and stop. For example, if you’ve heard someone say; “That was a great job…for a graduate/man/women/junior” the stroke would have felt grudging. If you know people who do this and excuse it as “It’s only my sense of humour” then perhaps enlighten them. Plastic strokes are like plastic food; they look tasty, but are are inedible. All people have to do is say: “That was a great job.”

The more we encourage people with positive strokes the more they will seek them out, like a plant growing towards the light. As leaders, friends, sales people, professionals and partners we can change behaviour by changing the way we stroke people. It really can be that easy.

In next week’s post we’ll meet the brainchild of Claude Steiner: The Stroke Economy, and will find five ways we limit our stroking patterns.

Please forward this blog to two people who you think would find this interesting. Thank you, for the strokes!

Mini ebooks and the next big book: Job Hunting 3.0 (Secrets and skills to sell yourself effectively in the modern age). Watch the blog for more information.

That’s all for this week… I’m off to stroke someone (probably me).