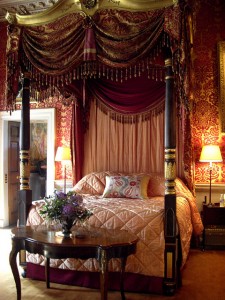 Is yours as palatial as mine? Ikea on steroids...

One way to keep your job is to improve your performance, which is underpinned, not by cleverness, but by having the energy to continually work to a high standard. And this is underpinned by biscuits. Well, to be more precise, by taking a break and having tea and biscuits. Sleep is good too, but harder to squeeze in to a tea break at work. Power napping in your car is becoming evermore popular though, particularly if you’re on a long journey and are feeling drowsy. I’ve power napped and a quick 15mins has really increased my alertness.

Energy requires input and converting biscuits into energy is a good plan. As we all know in Einstein’s famous equation E = TC2 (where T is tea and C is custard creams) the amount of energy you get is proportional to the number of dunks you make in a really good cup of tea.

Interestingly, archaeologists have recently discovered that 10,000 years ago ancient Britons discovered fire on Monday, brewed nettle tea on Tuesday and then baked primitive custard creams on Wednesday. No wonder homo sapiens became the dominant species of its kind…

And when the energy from biscuits is exhausted my recommendation is that you go to sleep.

Reputable surveys show that we need 7 to 9 hours a night and I’ve noticed, when coaching busy exec types, that people often try to manage on less.

Sleep allows our bodies to repair and our brains to sift and sort the day’s activities before filing memories away. If we don’t get enough sleep we run the risk of overload, followed by meltdown. So, there’s no long term honour in being a sleep deprived ‘hero’ or ‘heroine’.

In the new book How To Keep Your Job I offer plenty of tips to help people increase their energy and here I would suggest one of my favourites: Turn the middle of the week into Sleep Wednesday.

It’s not always easy to get to bed in good time when life works hard to keep us up, so the trick for more success is take back just a bit of control and every Wednesday make a point of going to bed 2 hours earlier than you would usually. That’s all…just 2 hours.

Over the course of a year that adds up to nearly 15 extra nights of sleep and will go a long way to clawing back your sleep deficit.

Imagine how much energy you’d have if you snoozed for a fortnight! And of course if you under-perform and lose your job, you’ll have between 6 and 12 months of lie-ins before getting your next job.

Help yourself to keep your job. Take a break and dunk a biscuit, have a Sleep Wednesday and buy the book. It’s based on real life successes and is there to get you ahead of the herd.

I’m off for a snooze now! Catch you later!