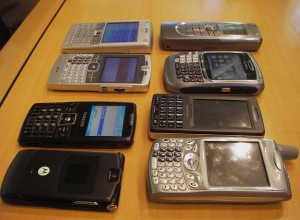 Put it away dear!

Ok, hands up if you have a smartphone? Keep your hand up if you tend to put it on the table during business meetings…I know I do.

I used to have a mark one Blackberry that slept in my briefcase and was only checked at the end of the day for emails. I kept it as a spare telephone and email catcher and that was it. My flip-phone just flipped and phoned and that was it too, so I would switch that off and park it in a pocket.

Now though I have a special NASA edition of the Blackberry which streams emails, sms, Facebook, Twitter, altitude readings and magnetic north compass bearings and is both simultaneously weightless and so tactile that if you don’t push a button once every five minutes, it sulks.

So of course I have to put it on the table during business meetings. It would be cruel to hide it in a dark corner.

However, last week I learned a lesson.

One of my co-Directors in our Centred Development training business commented that he sometimes works with a top Consultant who is ex-McKinsey. This chap is a successful globe trotting advice dispenser and on the subject of mobile phones he is unshakable. He says:

‘Switch it off. Put it away. Only check it at the end of the day. Nothing should come between you and your client.’

It’s a way of making sure you’re focused on the client and it tells them they are the most important thing at that time.

I’ve tried this on a couple of occasions and it did make a difference. So, if you’re trying to sell to people, take the telephone challenge:

Put your smartphone away and give the client 100% of your attention!

It could mean that you win the order!

…And if you’re in a meeting and fed up with your colleagues keeping one eye on you and one on their baby phones then set up a phone-creche. Fold a soft fluffy towel into a flat-bottomed basket and put all the phones in there, so they can all sleep together whilst you do some work. Ahhh…bless!

Interview Skills in The Guardian

We will continue with some sales skill tips…if you run your own business this series is here to help!