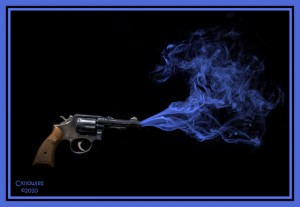 The smoking gun...but who was the real culprit in the story?

I have a confession to make. Well, erm actually not that one, tsk tsk, I’ll save that one for another time. No, this one is about paying attention to things, which is ironic, given that this week is all about attending skills. You’d have thought that I would do better, but sadly not so. You see it was the bacon’s fault.

The bacon? I hear you ask. Yes, the bacon.

You see I was cooking supper and had decided to turn some chopped boiled potatoes into roast potatoes, by frying them off. Given that oil likes to spit and spat I cunningly covered the pan with a plastic plate-lid, that is normally reserved for the microwave. Clever me! No oily mess.

This is where the bacon comes in. I stabbed open a fresh pack of rashers and noticed a brownish tinge to the end of them and a faint odour. Clearly the pack was faulty and the bacon not worth risking. However, as I was pondering the way life sometimes offers you off-ish bacon, my eldest son, Theodore, suddenly yelped out:

And as I turned to look at the cooker…oh dear…the plastic plate-lid was drooping and blobbing onto the hob, making the pan look as if I had just iced it, like a Disney-style cake. I flicked off the gas and carefully pulled off the remains of the cover, before it touched the rather pleasingly crisp potatoes, and knifed off the bits of stuck plastic from the edge of the pan. Phew, I had averted a possible fire there…and the lid was certainly ruined, but I may send it off to the Tate Modern as a piece of art, entitled ‘Plastic Menace (the dangers of not paying attention).’

In a sense the same thing can happen at a job hunting interview, where a lack of attention can see your chances of success melting away. We all need to attend to the people we’re with, the questions we’re being asked and the environment at large. The same is true at any meeting, of course, so these points really apply anywhere.

Here are my top 5 tips to improve our attending skills:

1) Put the pen down. Waggling a pen, or going clicky-clicky with a biro is downright distracting. If we’re looking at a pen, then we’re not really listening to you.

2) Put your hands in your lap. Waving arms can help to illustrate the size of the fish you caught at the weekend, but are often irritating when waved about with airy abandon at an interview.

3) Look at the other person. If you’re staring at the ceiling, hoping the answer will appear there, then remember the other person can see you doing this. Instead; make eye contact as you’re talking.

4) Smile. Obviously, don’t grin like a manic imbecile, or you will be taken as one. However, a warm smile imparts enthusiasm and helps to foster good feelings towards you.

5) Nod and say ‘uh-huh’. This kind of tiny para-verbal gesture let’s the other person know you are attending to what they are saying. To them, it feels like you are paying attention.

Ok here’s one extra way to keep yourself attending to the other person. As they are talking, keep asking yourself this question to stay sharp:

‘If they ask me something now, how will I reply?’

That’s all there is to it. I’m off to see what else I can melt on the hob and then to complain to the supermarket, because clearly someone wasn’t paying enough attention when they packed the bacon rashers.

Los Penguin Productions have posted the  Job Hunting Blues video on YouTube and please click through and enjoy it. It features Brian, our resident stunt man and he was great to work with, a real pro. And he was very happy to be able to read his own special, little copy of the book Job Hunting 3.0. If you know someone who is looking for work then please point them at Amazon where they can read reviews and order a copy of the big book.

…we will have a look at the art of ‘contracting for success’, which can save people untold misery at Christmas…!! (Oh no, I mentioned the c-word)