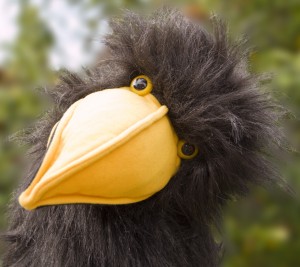 Watch out for weasel words ...and pigeons.

Caw! It’s me, your favourite Crow! Hello! Richard is too full of Easter eggs and says he needs to rest a bit so has asked me to step in for the next two weeks. Personally I think he’s asleep in the garden.

And, being a bird, I’m not entirely in favour of you all eating eggs! I mean! Come on…that’s a bit insulting to us birds isn’t it!? Can’t you find something else, such as a chocolate cucumber?

Anyway, my message this week to all you non-birds is to be alert. On the telly we’ve had Spring Watch, Badger Watch and Kate Humble Watch. And now we need Weasel Word Watch.

A pigeon was being mean to one of my sparrow friends and told him that ‘people didn’t like him’. Not very nice was it? Well anyway the word ‘people’ used in this way is a weasel word….because it stands for ‘I’. The pigeon was too cowardly to say ‘I don’t like you’, so he pretended there were ‘other people’ involved. What a weasel!

Well, a pigeon. Much the same thing!

If a boss-bird says to you: ‘People say that you need to make some improvements’ …then look them in the eye and ask them:

A) Who exactly are these ‘people’ ?

B) What exactly do you mean by ‘some improvements’ ?

‘People’ and ‘some’ can be weasel words because the person using them is hiding behind them, instead of you giving you honest and objective feedback.

Assert yourself and ask for the facts behind the statement. It’s often the case that you’re doing fine and that someone else just thinks you’re not: the evidence is in your favour.

In the case of my sparrow friend, he’s a great laugh and has loads of friends. So, don’t let your Easter week get spoiled by any pigeons with weasel words. Have fun! I’m back next week. Caw!