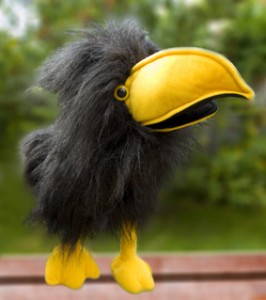 As a clever bird I like to think that I can do thinking and there’s three thinking styles I’ve learned to think about:

1) Canyon Thinking. This happens when another crow (not me obviously) thinks about every little aspect of a problem and spends so much time on the details they lose sight of the problem! You could say that, like a narrow canyon, their thinking is one inch wide and one mile deep! Ha ha! (What’s an inch by the way? Crows never got the hand of basic measurement systems).

2) Coyote Thinking. Some crows rush about doing the first thing that comes into their heads, without thinking through the consequences. A bit like Wile E. Coyote. Honestly, if you want something doing properly, get a crow to sort it, but not one of those silly impetuous ones.

3) Broad Thinking. Ah, I’m good at this. This is when I take time to think through and round and over a problem. Sometimes I sketch out the issues with my beak, talk to other crows and generally eye up the problem from all sides. Richard says he does this too, but you know, I’m not always convinced he does. But then he is human! Not everyone is as good as crows!

How was that? Hope you liked it. More Crow stuff next week. I might do a bit about ‘why pigeons are so stupid’. I could go on for hours….but do you know how hard it is to type with a beak?