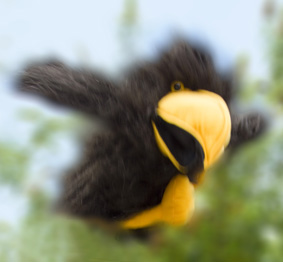 Well hello there humans and it’s my last week of standing in and quite frankly I’m amazed how much fun this blogging lark has been. (Unlike actual larks, who are no fun at all; smug birds with their Vaughan Williams music and all that). When Richard asked me to write something I was like all ‘no way man’ and like ‘but I’m a bird’ and all that sort of thing.

But now I’ve had a go and have realised, that despite the lack of opposable thumbs, I’ve enjoyed it.

Thinking is good and playing is good (do have a look at the other weeks if you missed them) and reflecting on them made me realise that sometimes you have to end things (or let go of a bit of baggage) in order to begin new things.

In my case I’ve ended my blogging ignorance and now I quite like this kind of thing. (Don’t tell Richard though, as he’ll get me on it every week and right now my beak needs a break).

So as the summer holidays come to an end and we all turn our wings towards the rest of the year I thought I’d invite you to think about this question:

What do you need to end, or pause, or let go of, in order to create some space to begin something new?

I know that’s a thoughtful question, but then again, unless you’re a pigeon (why are they so silly?), you can cope with it.

How did I do? That’s three weeks of typing, not bad for a mere bird! I’m off now for a rest and to work up the outline of my new book called ‘Pigeons: Why?’  …It could be a blockbuster….