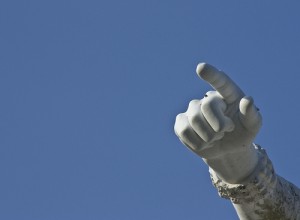 This finger belongs to Queen Victoria. Who is pointing the finger at you in your head?

Here’s a dilemma: Should I go to the beach or stay in and do some work? Naturally my Child wants to go and play and yet there’s a voice in my head that whispers caution…it would make sense to take advantage of a quiet house. I could get some work done and then have some time off to play. I ought to use the opportunity and tick off a couple of items on my to-do list…

When you re-read that dilemma it looks like you can ‘hear’ two people struggling to get their point across. In my Child Ego State I want to go and build sand castles and the other voice is my Parent Ego State, which is telling me what really is the best thing to do.

Who Is In Your Head?

The term ‘Parent Ego State’ refers to the collection of other people who have influenced us and who we carry around in our head. We carry their words and phrases and ways of thinking around with us and when we replay them, we’re said to be in our Parent Ego State. So, when I’m saying to myself that ‘I should be doing some work’ what I’m doing (in TA terms) is replaying a tape of Mum, or Dad encouraging me to work. Our heads are full of the voices from the past and we take them on board by a process called Introjection, which means we just absorbed them in directly without considering their meaning or purpose. We tend to do this at a young age and most of the tapes relate to the key influences we had at that time. Perhaps our family, our first teacher, a neighbour, or aunt or big brother all left their mark on us. Because we were young we didn’t question what we heard we just sucked it up and added it to our store of memories.

Now that we’re ‘grown ups’ we use these people to guide us and sometimes they’re helpful. We follow their rules and use their advice to make decisions. We copy what they did (or said to do) to take care of ourselves and others. Sometimes we need a bit of leadership and sometimes we need to look after people, so these influences can be helpful to have.

We might also carry around rubbish. We might have too many rules and these limit our freedom to act, or set restrictions on how we can have fun. We might have learned to take care of people by ‘smothering’ them with love or affection, or by telling them what to do before they’ve had a chance to ask for help. This isn’t a great way of taking care and is often the root cause of well meaning, but patronising behaviour.

The chances are that we all have a few rocks in our head and part of life is about recognising them, smiling when we trip over one and then doing what makes sense to us now. Often when we use the words should, ought, must we are in our Parent Ego State and are trotting out someone else’s wisdom, or rules.

Knowing about Ego States is useful because we can think about our behaviour and can decide to make changes. We can find new people to guide us, or can challenge what’s in our head and can stop doing the work and can build sand castles instead. That’s what I did on Sunday. And I had an icecream and I swam in the sea. It was great.

I was asked by someone if I ‘credited Berne’s work’ in my Ego State-related posts sometimes, as Eric Berne was the founder of TA and someone who came up with many of the models. This was a real Parental instruction, the smugness of which instantly made my Child feel rebellious (my Child hates being out-smugged). So, in the spirit of rebellion I thought it would make a great blog post for next week: How the Parent and Child Ego States interact. Can you guess how they get on and how they get stroppy?

Sadly for my credit-hound Berne didn’t invent Ego States, which is why I haven’t credited him as such. He based his work, and freely acknowledged it, on the ego psychology described mainly by Paul Federn and developed by Edoardo Weiss. What he did do was suggest that the archaic parent/child influences were also employed alongside a more grounded and rational position, which he called the Adult. We’ll meet the Adult Ego State in the future. He also drew some models and said lots of clever and thoughtful things and we love him for that too.

Is to…spot one thing that we do, or don’t do, that is based on one of our Parental tapes. When we find the thing, we need to ask if it’s helpful, or if it is getting in the way and needs to be ejected. Listen out for the shoulds and oughts as they are often a big clue. Should we do that thing? Really???

Job Hunting 3.0 has had it’s first review (thank you) and I’ve been told an excerpt is likley to be in the Sunday Times too, so that’s two good things to celebrate. If you have read the book please do add your review to Amazon as they make a difference. Just click here – thank you!

Thank you for reading to the end and remember to begin spotting when you’re in your Parent. If you want to, that is.

Next week is about when the Parent and Child battle it out…and get on sometimes.