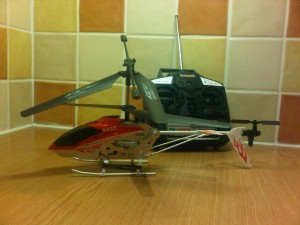 Take a look at the photo…it’s a Fiery Dragon S032 gyro stabilised helicopter. Stable and ‘easy’ to control you can fly it around your living room and land it on a book, with a bit of practice. Or you can take it outside and with no practice whatsoever attempt to land it on the roof, when you whack up the power too fast and forget there’s no ceiling in the garden. Oops. All great fun and not as expensive as you might think. Oh and you can clip a Lego man to the skids when you need to play mountain rescue, but that’s probably too much detail for now.

I thought I would show it to you in case you needed a little nudge to go and get your reward after last week’s post. Of course you can choose your own reward for working hard; some people have already told me that they prefer new shoes, or a quiet latte, for example.

Being outside earlier reminded me that the gently stretching days and warmer weather means that Spring has arrived, although I’m sure this really means that snow can only be a hop and a skip away. Spring is a great time to shrug off the dark winter blues and think about the year ahead, particularly as the financial year is ending and a new one is beginning.

However, as we plan our next sales drive, or budget for some marketing work (or even an ILM Coaching programme from Primary People) spare a thought for the people who are important to us in our work, or indeed in our private lives.

So… who is coming on the journey with us? Who do we need to invest time in?

If we did ‘somethings’ last week, then perhaps now is the time to do ‘someones’.

Think about who is going to be important to you this year, either in work or at play and say thank you for the good times ahead…rather than just saying thank you for times past.

Send them a thoughtful email perhaps, or find a way to let them know they’re special to you, or that you appreciate their hard work.

I think I may take Crow shoe shopping. He’s that kind of bird really and as he finds remote control units too fiddly for his beak and caffeine just sends him loopy, he’ll prefer that experience. I think he mentioned liking basketball boots. We will have to see.

Well that’s my idea: What will you be doing and with whom?