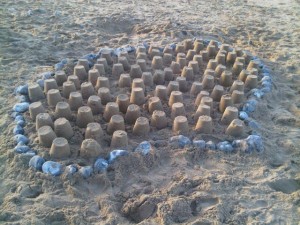 I’ve been on the beach all weekend (and Friday too, after school). Laptop off. Phone off. Brain off. Just enjoying making sandcastles with the kids, flying kites, swimming and splashing, lounging in the sun, eating chips, catching crabs off the pier and waving to the air sea rescue helicopter as it thundered by, close to where we were standing. Maybe the crabs we caught waved too. Hard to tell, as the light was fading and we were also entranced by a brilliant pink sky.

It felt like a mini-Summer holiday. Oh and we did ice-creams too, with two flakes (well, you have to live on the edge sometimes).

It was a brilliant weekend and I hope yours was too.

It reminded me that switching off the electronic chatter is good for the soul and a great way to free up your head and focus on the really important things in life, namely how far you have to dig down through the sand to find water (about 18 inches)…

…It was also great to watch my eldest son, Theodore (10yo), build himself a sandcastle beach sculpture. He worked quietly and thoughtfully until he had made 100 sandcastles and then he ringed them with pebbles and flints.

He had to push himself to reach three figures and several castles needed rebuilding when they collapsed, but he persevered and finished it. It looked great as the sun dipped and shadows grew. Even better was the fact that several people stopped to admire it, and a few even took photos.

Sometimes we have to lose ourselves in a task to get somewhere, whether it’s an interesting piece of work, or a leisure activity. So, whatever your week has in store for you, have a think about what your ‘100 sandcastles’ task might be.

Maybe switch off your phone as well for a while, take a tiny-break and be calm for a few minutes!