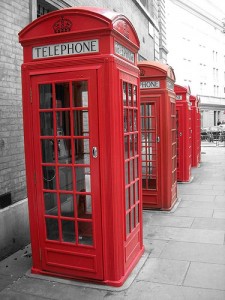 The giant iGoggleSunny smartphone even has a door!

How much do your staff really know about the products or services they work with? Here’s a little story about ignorance.

Having decided to go out and buy a smartphone, I popped into our local shop and picked up the best selling uPooh and its chief competitor, cleverly called the ACME Rectangle. Choosing between two rather similar cuboid gadgets is never easy so I asked the cheery looking chap behind the counter for some help. I hefted the Rectangle and asked:

“How is this different from the other one?”

“What does that mean?” I asked innocently.

“It means it’s quicker,” he replied, as if that would settle things, but he was wrong.

“Yes I know what ‘fast’ means,” I said fixing him with a mild stare, “but what does it mean in terms of performance?”

Well that seemed fair enough; everyone needs to have a first day at work and so I relaxed and was about to let him off with his ignorance when he mucked it up by adding:

What!? You’re in a little shop that only has about 10 different handsets on offer and after four weeks you know nothing about your top two products and expect to sell them on the back of ignorance? I wanted to say all this, but I decided just to think it instead, to spare his blushes. You only have to spend a couple of hours on Google to round up some high quality information, so I have little sympathy for someone who hasn’t bothered to find out about their products in four weeks. He did offer to get the owner of the shop to call me, to discuss the handsets and dazzle me with an attractive tariff. Ten days later the owner has yet to call, so I can only assume that he doesn’t want my business. Perhaps he’s a millionaire and owns a little phone shop as a hobby?

This kind of lazy attitude always puzzles me because, not only am I unlikely to buy from them, I’m also going to tell my network that they offer a poor service. The high street is littered with the retail wrecks of beached businesses and although some of them will have been hit by harder trading environments, my hunch is that at least 50% have been hit by incompetence.

How much do you know?

If you’re going for a job interview you need to know about your CV (I’ve met people who haven’t). If you are selling a product your expert knowledge brings credibility,which builds trust, which eventually wins sales. If you manage a team, you need to know what they know and what gaps they have…or you could be losing business just through ignorance. Successful selling starts with knowledge: What do you need to find out about?

There’s a range of useful information packs in the shop and if you’re in the mood to find out things perhaps start with one of the coaching packs, which both contain useful questions because sometimes knowing the question is what really matters.