Job Hunting Tips #4 …Do Something 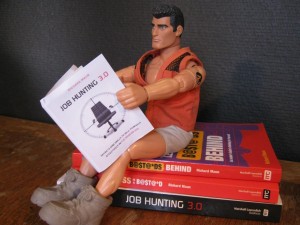 Brian does something to improve his chances of finding a job

There are currently 2,470,000 people registered as unemployed in the UK, which is split roughly 1.46 million men and 1.01 women. I mention this because losing your job can feel like you’ve been cast into a snake pit, where your chances of getting out again seem slim and uncertain.

In my experience, people looking for work seem to think they are in competition with all the 2,469,999 people who are also out of work. They tell me that it’s impossible to get a job in a recession (it isn’t). That there aren’t any jobs out there (there are). That nobody wants to hire them (this isn’t true). And so on…

People give away their power by using negative words and scary statistics to frighten themselves into inaction. A classic example of this is when people say:

‘I’ve been made redundant.’

Of course the truth is that they haven’t. The job has been made redundant. They remain a useful and talented person, who is looking for work.

This post has the title ‘Do Something’ for two reasons. Firstly, if you change your language you retain your power and can set yourself up for energetic and productive job hunting.

Secondly, and this for me is the BIG one, do something to cut down the odds against you. I’ve noticed in job hunting workshops about 40% of people own a useful job hunting book. If you buy a book and read it you’re now ahead of the 60% of people who know nothing and don’t invest in their own future.

And I’ve come to realise that about 30% of people bother to properly prepare for an interview. By ‘properly prepare’ I mean rehearse their Minute To Win It, practise their STAR answers, know which questions to ask at the end of an interview and are aware of how to use attending skills to maintain contact with people.

If you are one of six people waiting in turn for an interview, the chances are that only two of you will have prepared well enough. Would you like to be one of them?

And finally, it’s true that networking is the smart way to find a job. How many job hunters make a concerted effort to go networking? About 10%. This means that if you go networking then you’ve left behind 90% of the unemployed herd and are competing with a much smaller pool of people. By the time you think about how many people with your skill set are actively networking, you might only be in competition with a few tens of people.

So, if you really want to get a job please do something to increase your chances; buy a book (any relevant book), go networking and really prepare for your next interview.

Do something. Increase your odds in your favour. Do it today.

Here’s fun. My chums at Los Penguin Productions have posted a new Job Hunting Blues video on YouTube and you’re welcome to have a look. It features Brian, our resident job hunting stunt man. He was great to work with, a real pro.

More Opportunities To Do Something

The Minute To Win It, the STAR answers and much more useflness can all be found in the book Job Hunting 3.0. If you know someone who is looking for work then please point them at Amazon.

We’ll be looking at attending skills. How well do you engage with people?