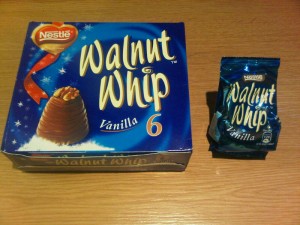 A Mystery: The Case of the Disappearing Walnut Whips

In the box on my lap I had six walnut whips and now I have just two left. I blame the rain really, as there’s only one thing to do when it’s all soggy outside; eat chocolate.

Now up until this point you might be thinking that I have scoffed four walnut whips, and I may well have. I’ll tell you later.

However, the key point here is that the story becomes more interesting when we have some numbers to give us a sense of scale or scope.

It’s the same for CVs and cover letters as well. Adding numbers to our achievements serves three important functions:

2) Numbers reveal the size of our achievements. This gives people a real sense of how we could add value to their business. If I could eat four walnut whips at home, I could come and do that in your business too!

3) Numbers make things interesting. Plenty of CVs are dull, bland, full of clichés and generally lifeless. Stir in some numbers though and we become interesting and our stories gain life and style.

All achievements can be measured in some way and there are no exceptions to this. It might take you some time to think through your own numbers, but it’s worth the investment as that could be the hook that snags your next interview. We can think about:

Things can be measured in £s or % or hours or minutes. As a result of your work did the trend line go up or down?

If you’re struggling to measure your achievements it could be because the biggest net effect came from a downstream process. If this is the case it’s ok think about the consequences of your work and to focus on this.

Examples of achievements can look like these handsome bullet points:

• £50,000pa saved in factory overtime as a result of finding capacity increases by using Lean tools, such as single minute exchange of dies (smed).

• 30% increase in the number of sales calls made each week by setting targets for the team and then reviewing progress each Monday.

• 120 people trained in coaching skills, including 8 who went on to pass the senior coaches exam (100% pass rate).

…These are broad examples to show how each achievement becomes an interesting little story when we add numbers. Your challenge is simple; take a fresh look at your CV or your marketing literature (if that’s more relevant to you) and add one number to each key achievement.

Remember: Make numbers even more interesting by multiplying them up over a year. For example, a saving of £2,000 per week isn’t as eye-catching as £100,000 per annum.

Once you’ve finished adding numbers, compare the jazzed up document with the original and ask yourself:

Which version does a better sales job for me?

Oh and the walnut whips? Well, I had one, the twins shared one and the other two were handed out to a couple of chums on Twitter…

There are more tips and worked examples in the book Job Hunting 3.0, which was described by a journalist recently as ‘a definitive guide to getting a job.’ If know someone who is looking for work then please point them at Amazon.

We’ll be looking at one of the easiest ways to do well in an interview. You’d be amazed at how many people forget to do this one thing.