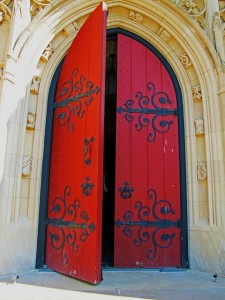 Minds, like doors, need to be kept open at all times

…Maintain an open mind. Last week I was chatting to a person who said he was ‘out of work’. This is quite a passive statement and helps to reinforce negative feelings, so I was not surprised that he said it with an Eeyore sigh.

Much better to be ‘looking for work’ or ‘looking forward to my next job’ as these forward looking phrases help us to remain more upbeat.

As I met the person before going on air at a local radio station I had both Job Hunting 3.0 and How To Keep Your Job in my hand and I happily showed him the books. His response was, without opening either of them:

‘Hmmm….these books are all rubbish.’

(Actually he said a ruder word, which rhymes with rap).

‘Well now,’ I replied with a smile, ‘the world is full of books and perhaps some of them might rhyme with rap. But not all of them. For example, these two are based on real life coaching conversations and feedback about what really works and what doesn’t. You don’t have to choose to read them, but if the next person does, then you’re going to be disadvantaged.’

He mumbled something along the lines of ‘I see your point’ and grudgingly gave them a closer inspection.

If you’re looking for a job then keep an open mind and judge things on their merits and not on preconceived ideas or simple nervousness.

Books are a force for good, as is coaching, or getting support from your friends. I’m always amazed that people hoping to earn £200,000+ over the next 5 years spend zero on their own success and leave things to chance. And I’m saddened when people prefer to say ‘no’ to new opportunities and new learning, in order to stay stuck.

So, if you catch yourself making poorly judged sweeping statements, stop and think. Think about what you can do and who you’re gonna call?

….But don’t call them unless you’ve just been slimed. Amazon, a coach, or a well informed friend is a much better bet.